As mentioned in earlier posts, one of my targets this year was to watch and photograph the emergence of the Emperor Dragonfly, the ultimate emergence of Britain's largest dragonfly. I have a few in my pond and over the past few weeks, I have been monitoring them during the early evening to see if they are showing signs of emerging. A couple of days ago, I saw one climb on to the reed under the water and Saturday night about 10.15pm, I went out to see what was happening and it had started emerging. I didn't know whether to watch this spectacle of get the camera. In the end, I opted for the best of both worlds, watched some and took a number of photographs. It wasn't at the best angle in the pond and after playing around with various settings, I ended up with a few nice shots. While I was happy with these, what I really wanted was for one to emerge on one of the reeds I had put in. A bit of homework if it emerged on here would give me a more comfortable position to take some photos on, a clean background against the grass and hopefully the shots I had in my head of the emergence. During Sunday when I checked the pond, I could see an Emperor nymph on my chosen stick in the shallows. I was just excited about the prospect of what might happen that night. Around 6.30pm, I was sitting in the conservatory with the family having dinner when I looked out to the pond to see the Emperor nymph starting to climb up. The dinner was soon finished and I got all the equipment needed and headed for the garden. Most literature I have read says the they start emerging after sunset in the dark but at 6.45pm, it was still very light. I set up the tripod and camera and as the light wasn't too bad, started off using AV mode, f8, ISO 400 and the speed was around 150. For the next hour or so, I was treated to one of the best dragonfly spectacles I have ever witnessed as the Emperor slowly emerged. As it slowly got a little darker, I changed the settings to manual mode, speed set to 250, ISO 400 and f8-f11. This gave me a slightly darker background which still gave a nice contrast between the subject and the grass. By about 8.30pm in drizzly rain and me trying to hold an umbrella over my head whilst taking photos, the Emperor was fully emerged with wings fully formed but closed. With a number of shots taken and having had a good time studying this magical moment of nature, I headed back indoors. Most literature suggests that before light, their wings are opened and ready to fly and early this morning, I went outside to see but there was no sign, just the exuvia clinging on to the reed stem. I hope that he makes it alright and matures up to be the the stunning insect that they are. As for my photos, I might as well sell the camera now. I am so very pleased with them and although I have said before, I might not take any better photos in my life but I have achieved one of the ultimate captures in nature, The Emperor Dragonfly emerging. 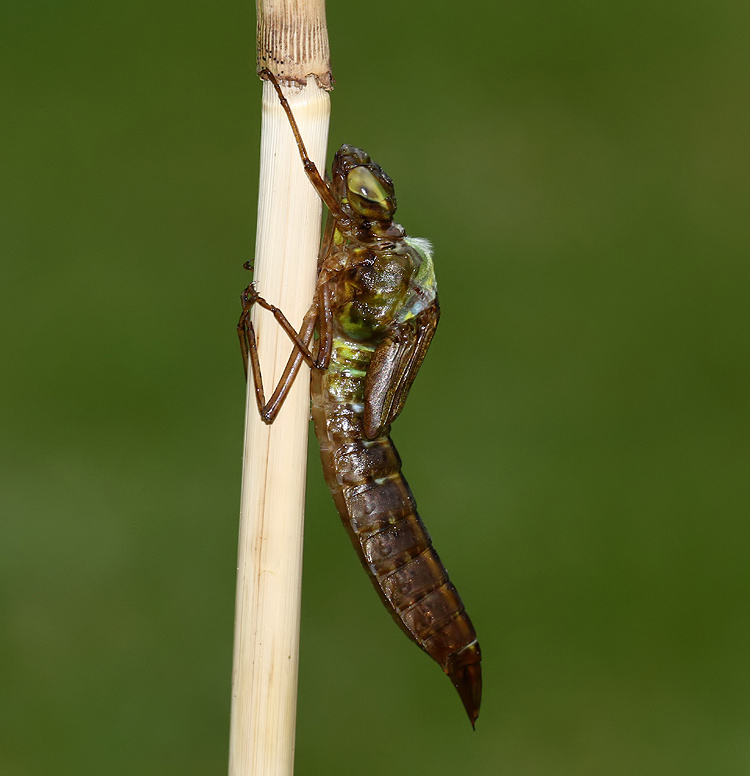 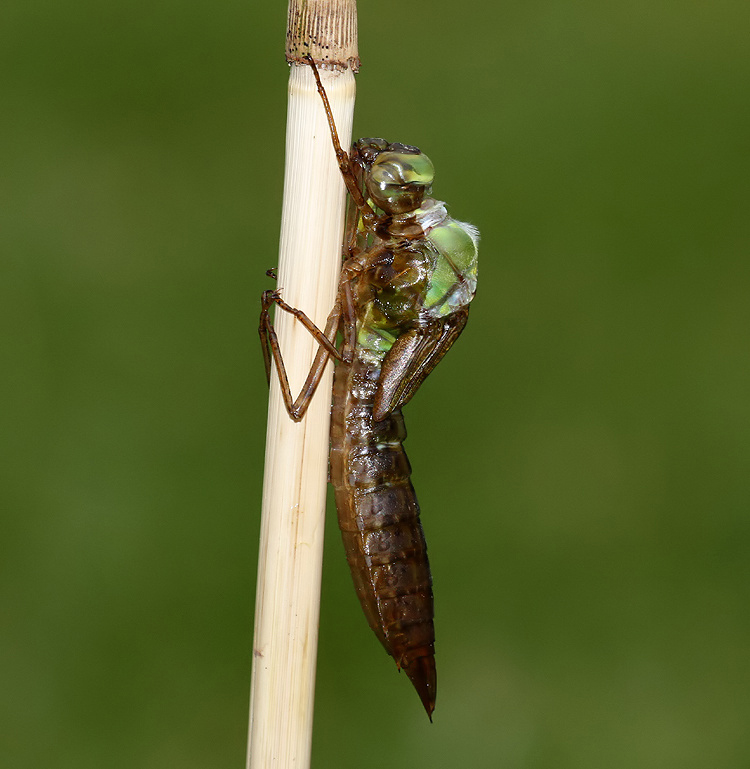 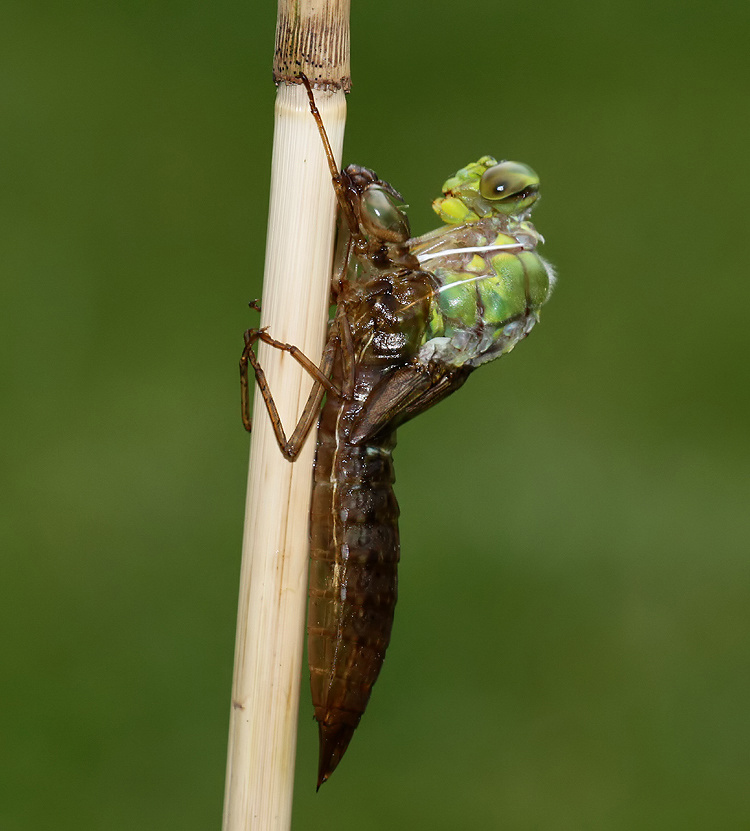 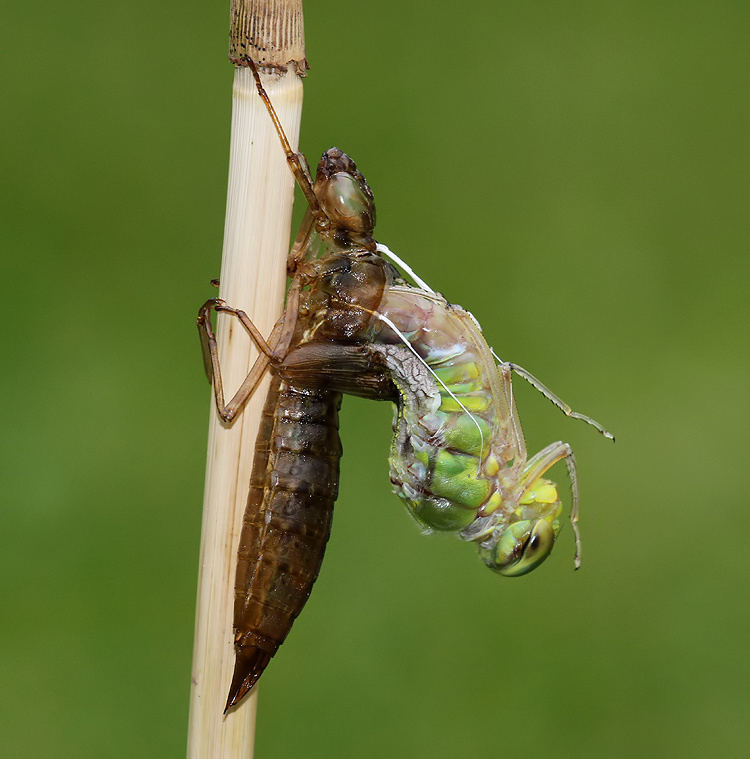 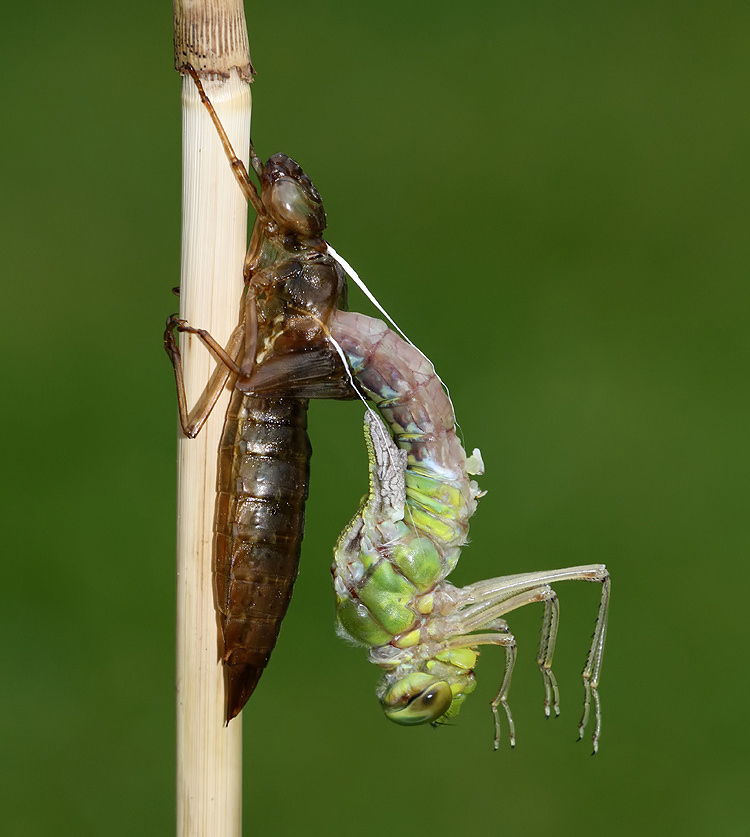 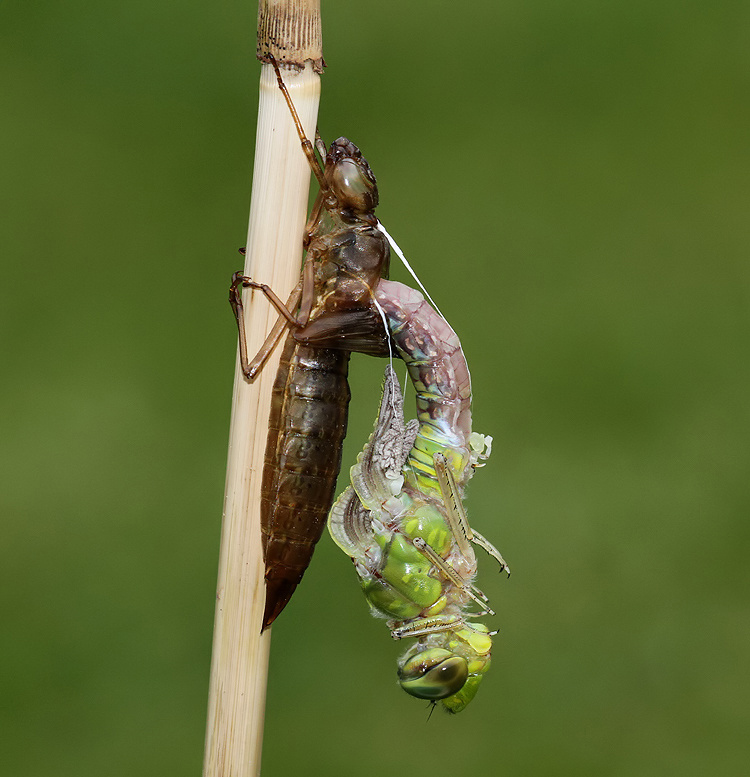 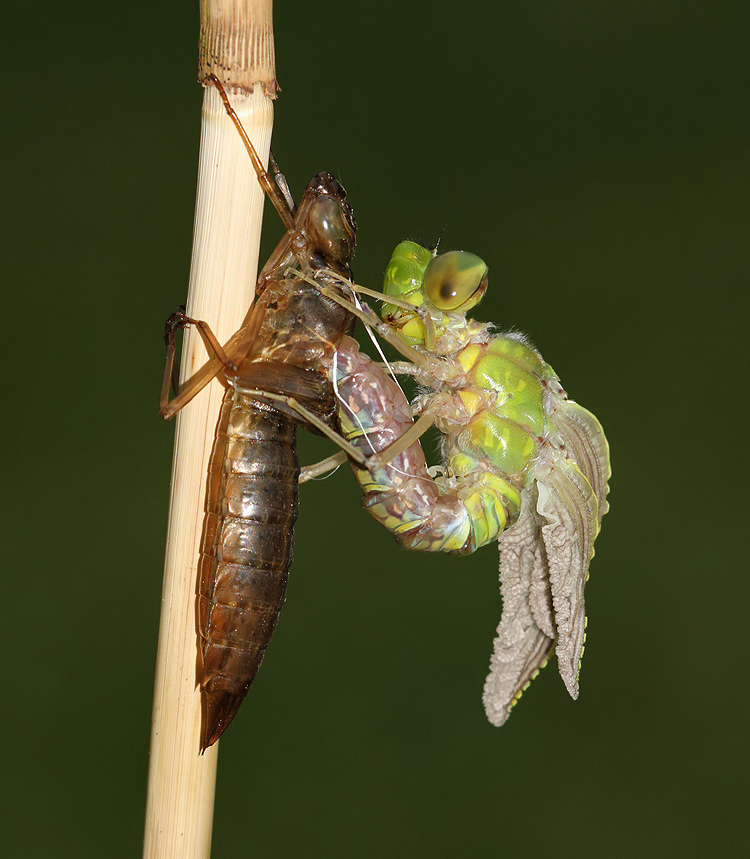 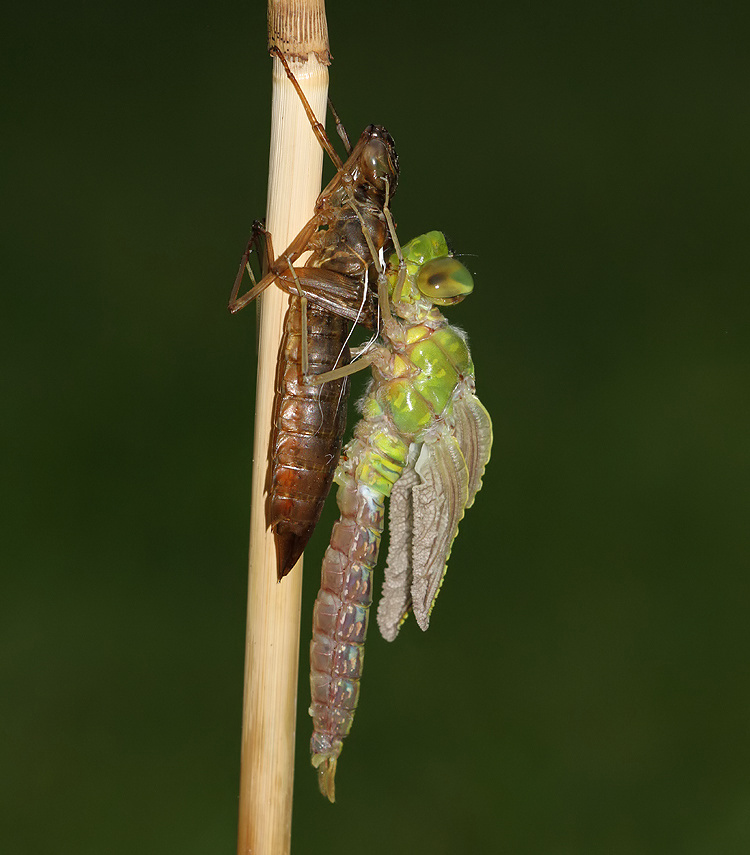 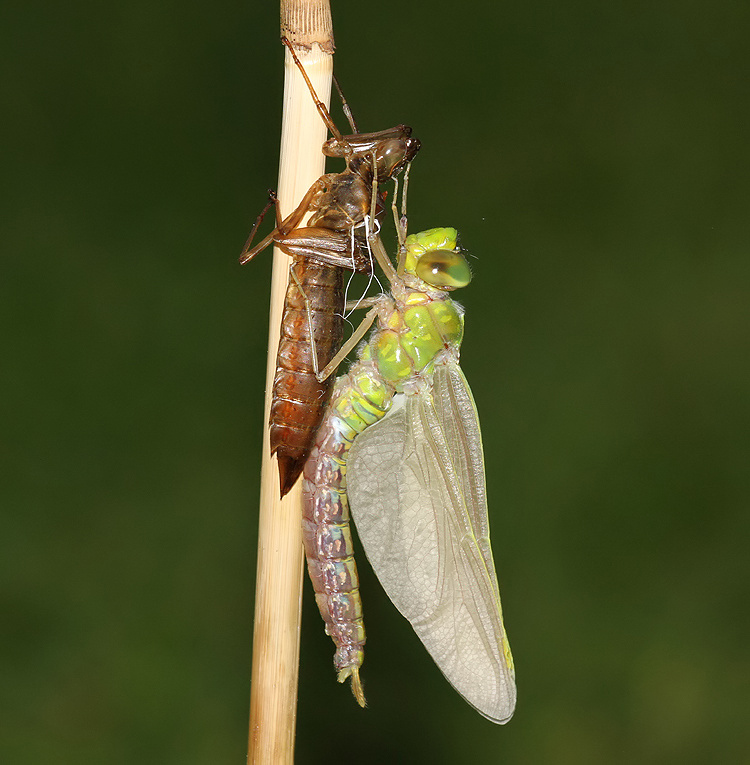 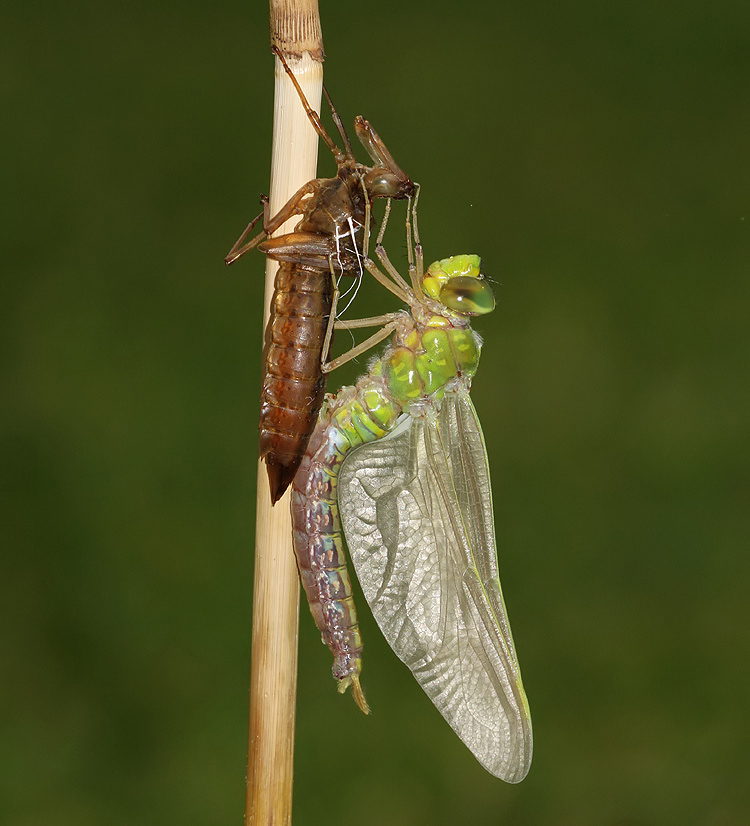