I was very lucky last year to have about 15 Southern Migrant Hawkers at Nethergong and through their season, I was able to observe them mating and egg laying. Having never seen or photographed a Southern Migrant Hawker nymph, I was optimistic that if I had a few netting sessions at the right time, that I might stand a chance of finding some. Fast forward to this year and around early April, I had my first netting session and with quite a bit of water still in the pool, it took a while until I started to net a couple of Hawker nymphs. Enter my massive mistake. Although I had done a little research on the nymphs, I now know I was not fully prepared to identify the Migrant Hawker nymph and the Southern Migrant Hawker nymph which are very similar in appearance. I spent a while looking at the few nymphs caught and really couldn't make my mind up what they were. The mask on the Southern Migrant Hawker nymph is somewhat squarer than the longer mask of the Migrant Hawker. The female also shows a longer ovipositor. I went back a few weeks later and with the pool drying up quickly, I soon found about 40 Hawker nymphs. Again I had a look through them and found a few potential candidates so decided to take four back home with me to photograph and put in my pond with a view to hopefully photographing an emergence should they be Southern Migrant Hawker. My biggest mistake was made next. Unfortunately when I returned a week or so later the pool had completely dried up and there were no sign of any nymphs. I was gutted. Maybe I should have realised this and moved them to another pool on site. This really annoys me still as it's likely the growing colony are wiped out. I just hope some appear there again this year. Anyway early last week I was putting the washing out when I noticed an exuviae at the pond. I took it inside and after examining it through the hand lens, was confident that it was indeed a Southern Migrant Hawker exuviae. I knew three other likely candidates were in the pond so kept an eye out each night. Again the next night a Southern Migrant Hawker emerged which I missed. On Thursday when I went out at night with the torch I could see a Hawker nymph at the base of the reed. I waited for some while but nothing happened. On Friday night I checked again and this time the colours could be seen through the larval skin. I was pretty certain this was a Southern Migrant Hawker nymph now but again due to a strong breeze, nothing emerged. Enter Saturday night and when I went out to look around 10pm, the nymph was higher out of the water on the reed. The colours were now clearly visible and I was now in no doubt that this was a Southern Migrant Hawker nymph. A look through the internet reveals no photos of them emerging so this was even more important that I witnessed and photographed this event. I set about getting all the equipment ready and then settled down on a blanket at the side of the pond. Around 10:20pm the nymph climbed higher and started to settle down to emerge. Over the next one hour and forty minutes I had the privilege to watch a male Southern Migrant Hawker emerge into the darkness. They really are quite yellow compared to other hawkers emerging. Having captured the whole emergence and the time just after midnight, the hawker took off into the darkness to hopefully mature up and help the next generation. What a super night and always nice to capture something you have never seen before. On the downside, it still hurts about not moving the nymphs when I had the chance and make me wonder how many others would have emerged. I have now spent a lot of time learning the different features about the two hawkers nymphs should I find myself in this position in the future. Fingers crossed for a good season and that they might return. I will certainly be looking. 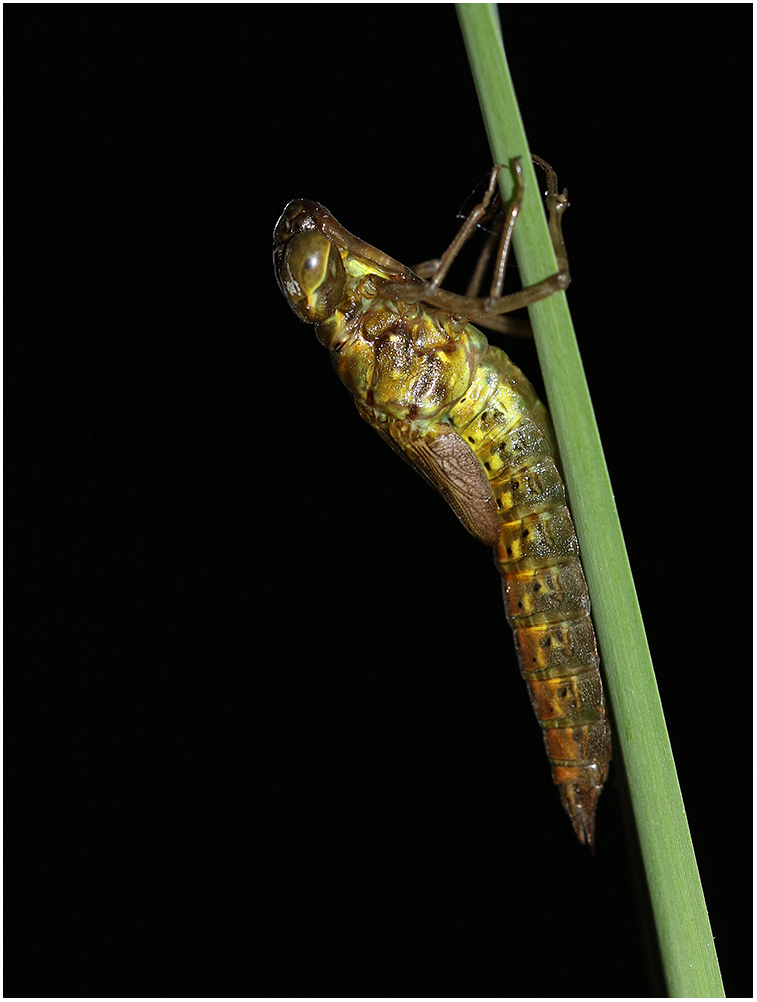 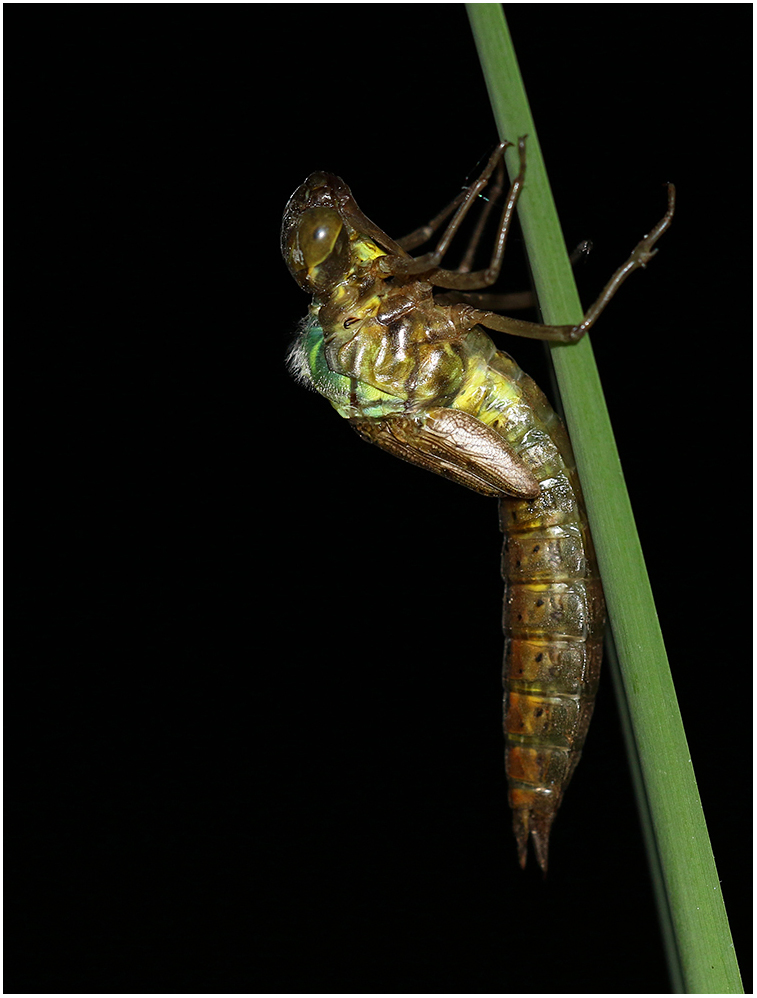 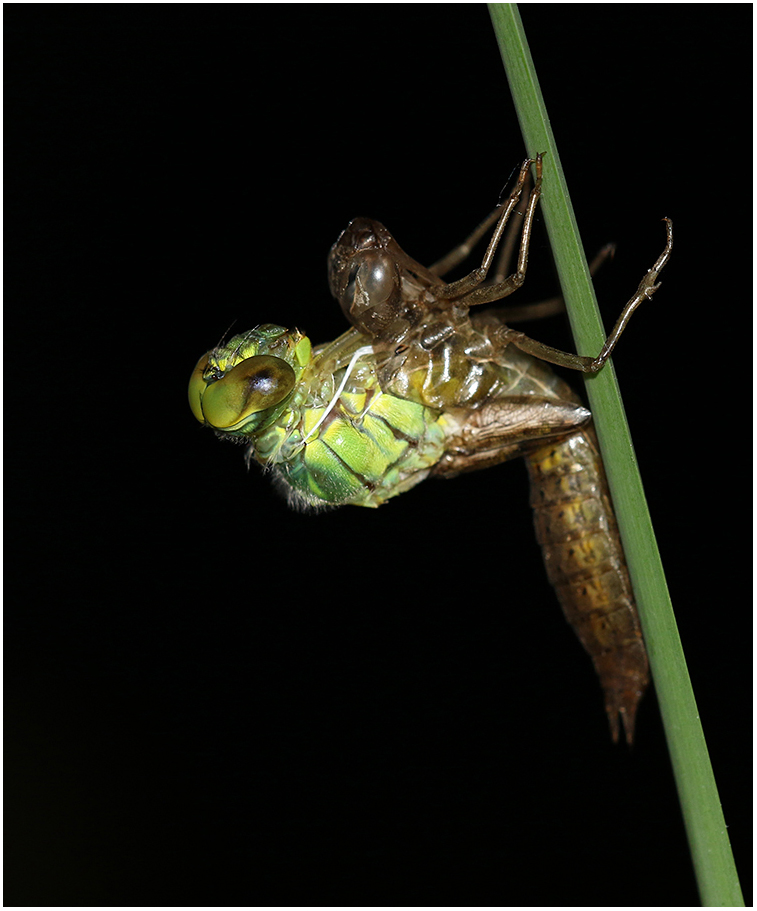 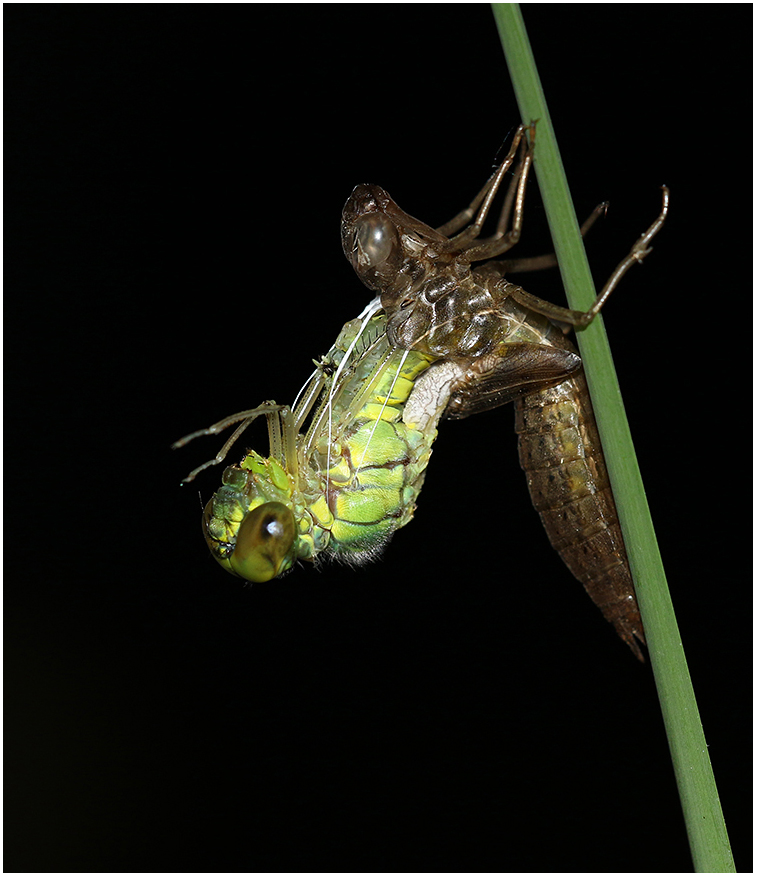 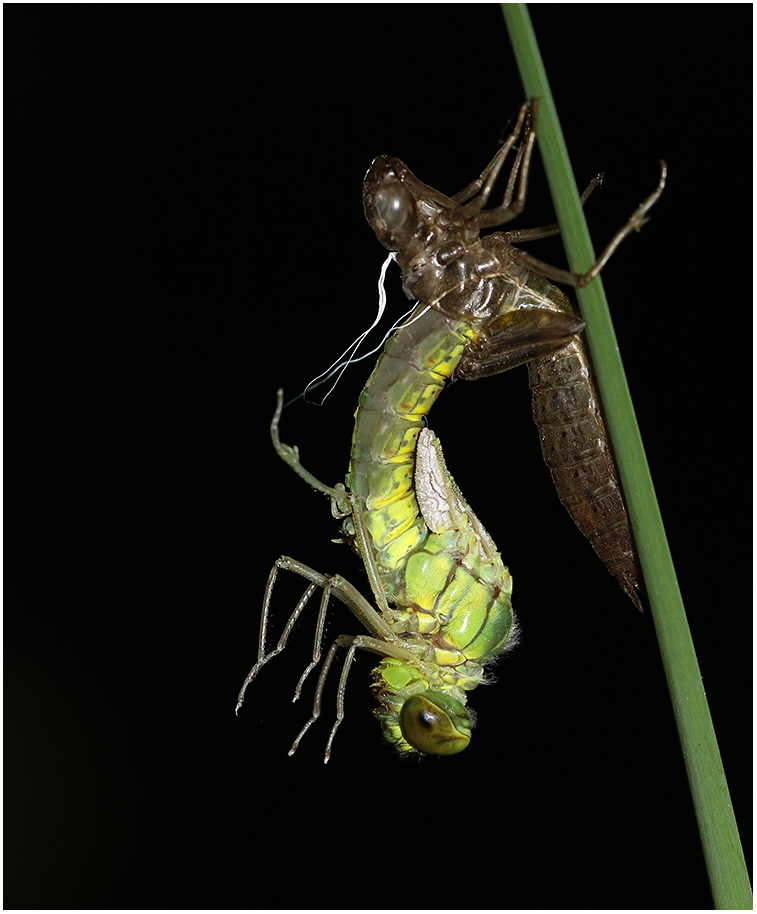 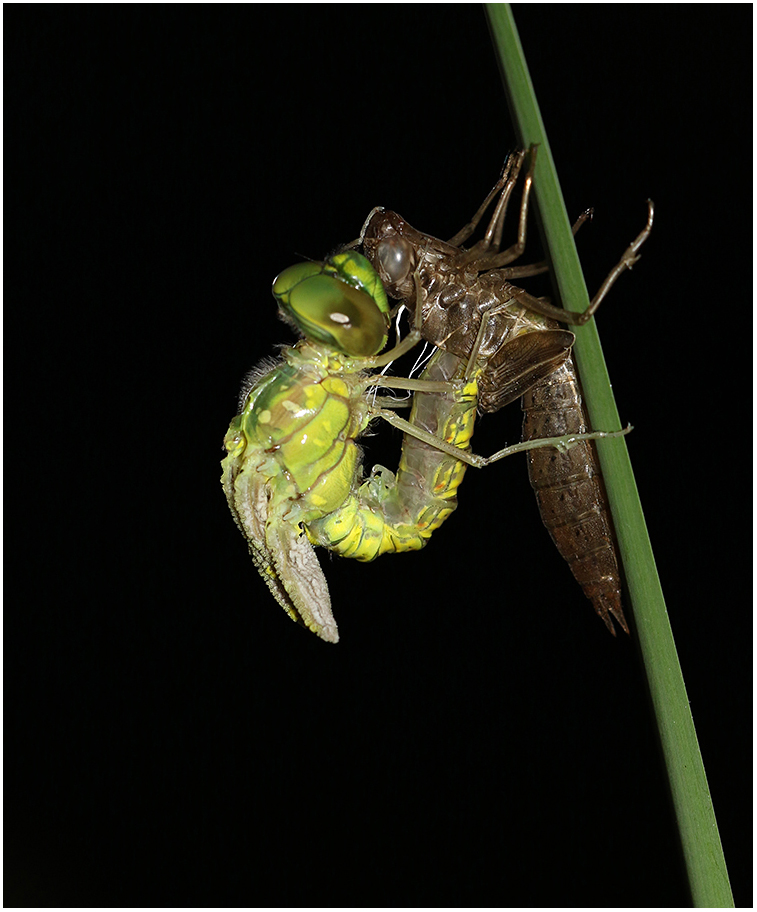 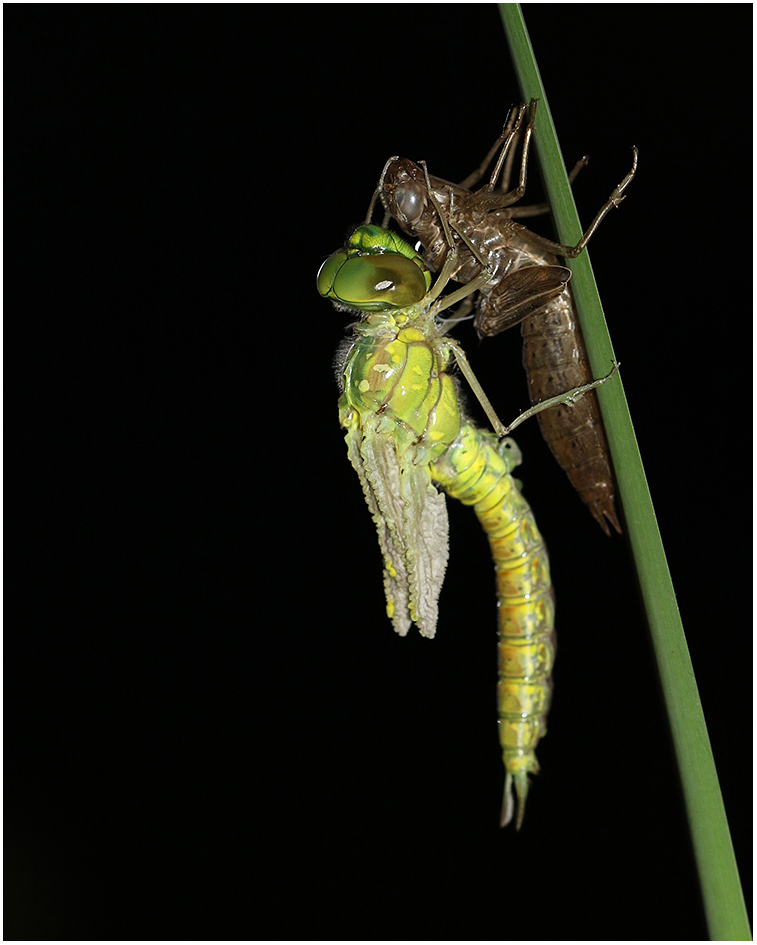 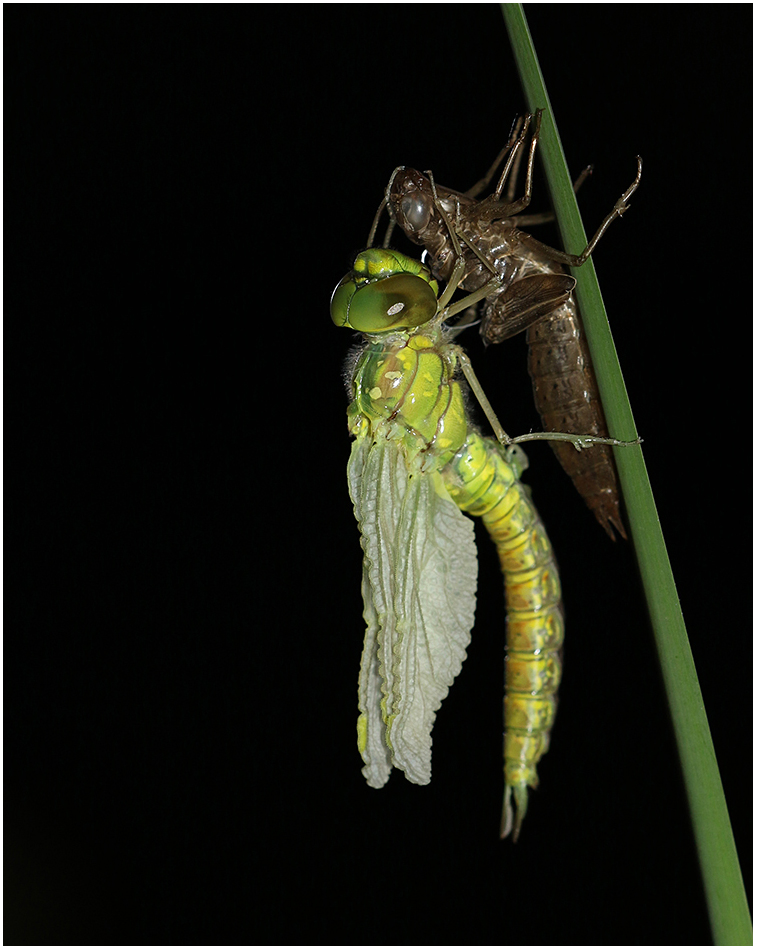 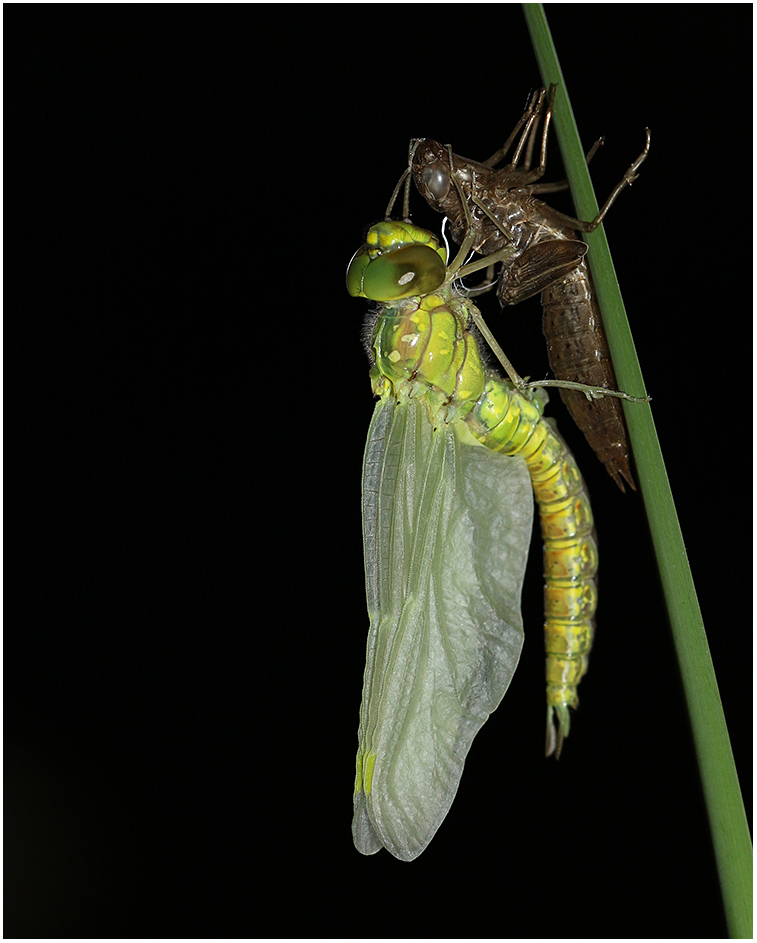 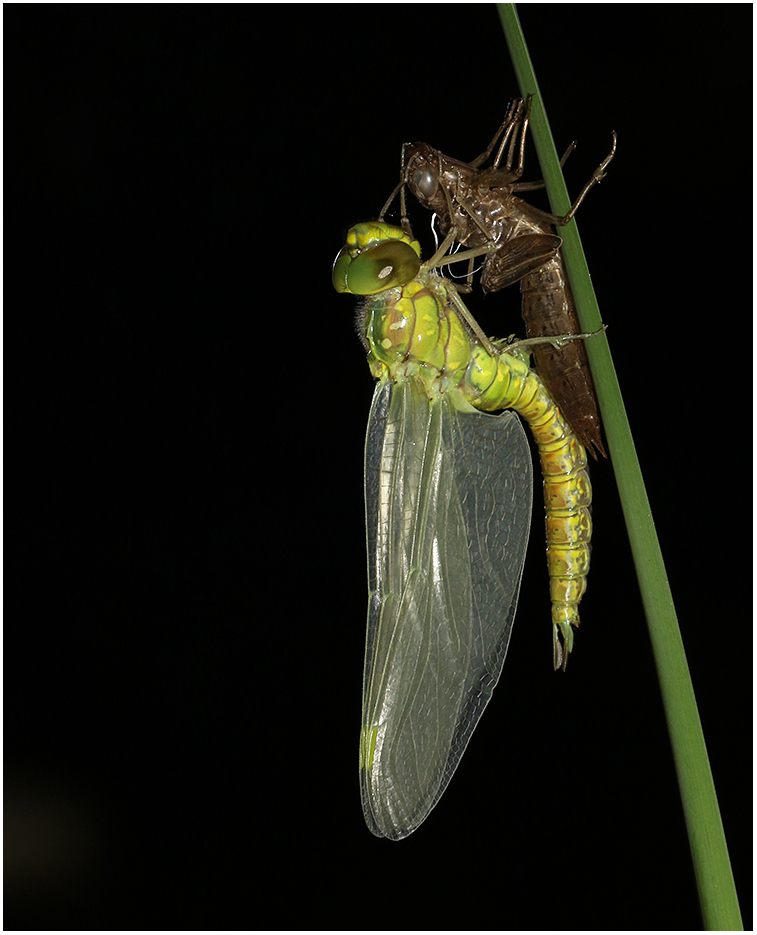 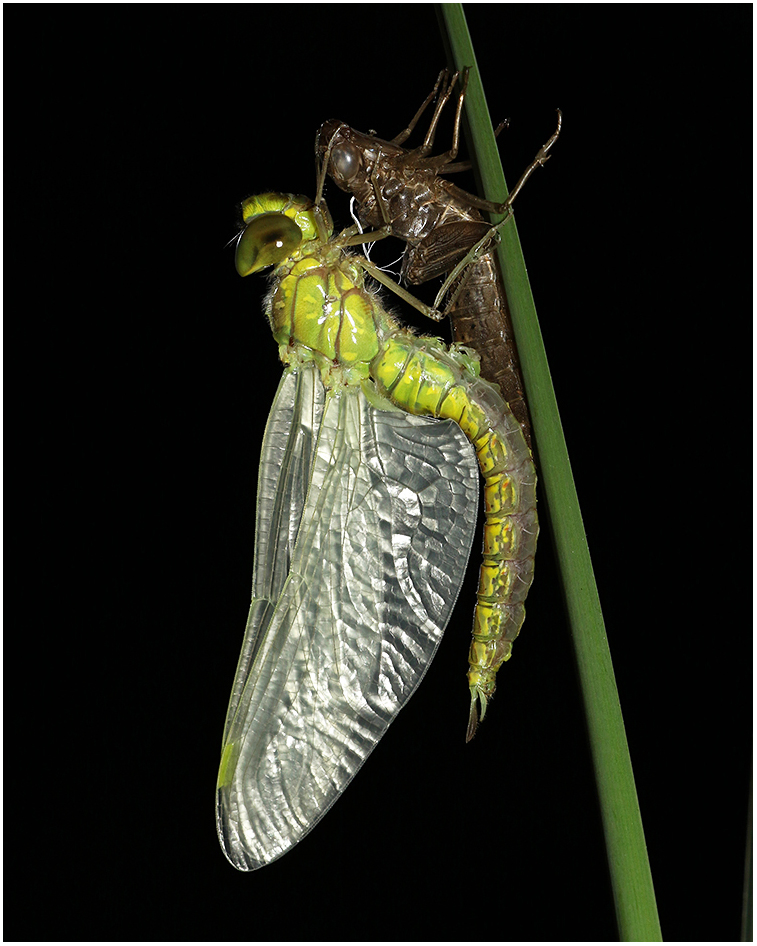