It's been another successful year spent studying and photographing the many species I have encountered in and out of the county but if I'm honest, there has been a massive desire to see a particular species which seems to have been present in certain parts of the country this year, but very rarely in Kent. This species is the Vagrant Emperor, a species which I have never seen before but have wanted to for quite a few years now. Two days ago whilst going through my Twitter feed and messages, I come across some photos of a Vagrant Emperor which brought a smile to my face. I then noticed that it had been seen in not just my county of Kent but quite nearby at Sandwich Bay Bird Observatory. This got my attention straight away but with work during the week, I really thought my chances of connecting were about zero percent. A few messages were sent out last night where I tried to arrange a visit during the evening but unfortunately, this was not meant to be. I went to work this morning in the hope that the Emperor would still be around but with some lovely sunny weather, I felt for sure that it would take to the wing and fly off. To my surprise then, I received a message from Andrew Lipczynski alerting me that it was still present and in the same area. This got my hopes up and a few more messages later, I had arranged to drive down after work where I hoped I could meet the warden Stefan at Sandwich Bay to hopefully see this new dragonfly. The end of the day couldn't come quick enough but at 3:50pm, I was picked up from work and was soon on my way down to Sandwich. I arrived as it was getting dark around 4:30pm where thankfully, Stefan was waiting in the car park, what a relief! We made our way to the area concerned which I would never had found on my own and then in the torchlight, there it was, my first ever VAGRANT EMPEROR, a female. I was straight away struck at the size of it and thought it would have been a little bigger but after having a good study at close range, I attempted a few shots. Thankfully, Stefan was at hand to shine some light on her allowing me to focus with the macro lens and take a number of photos. 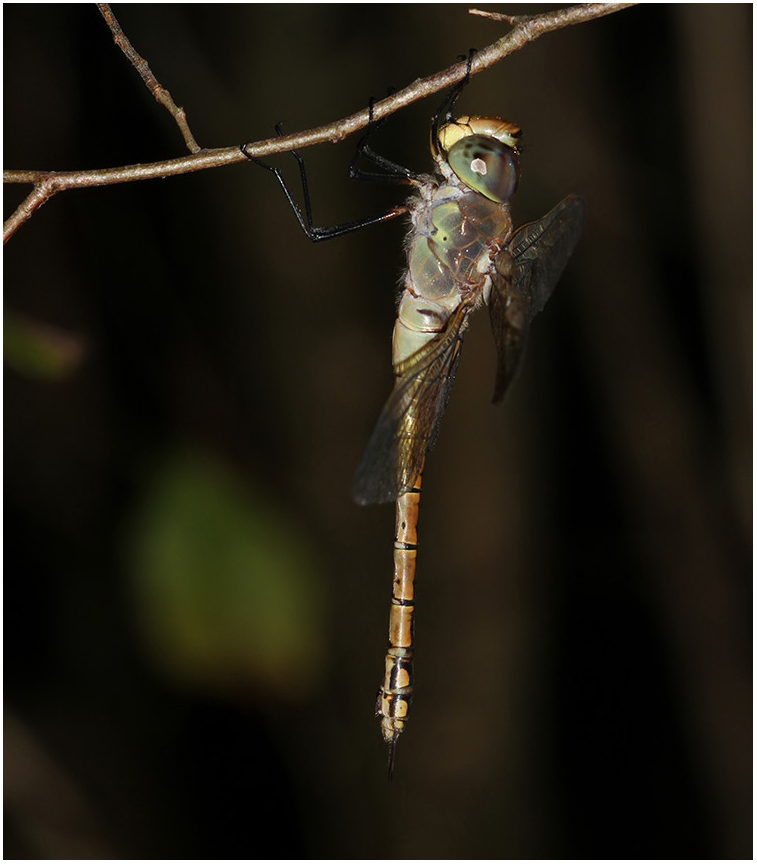 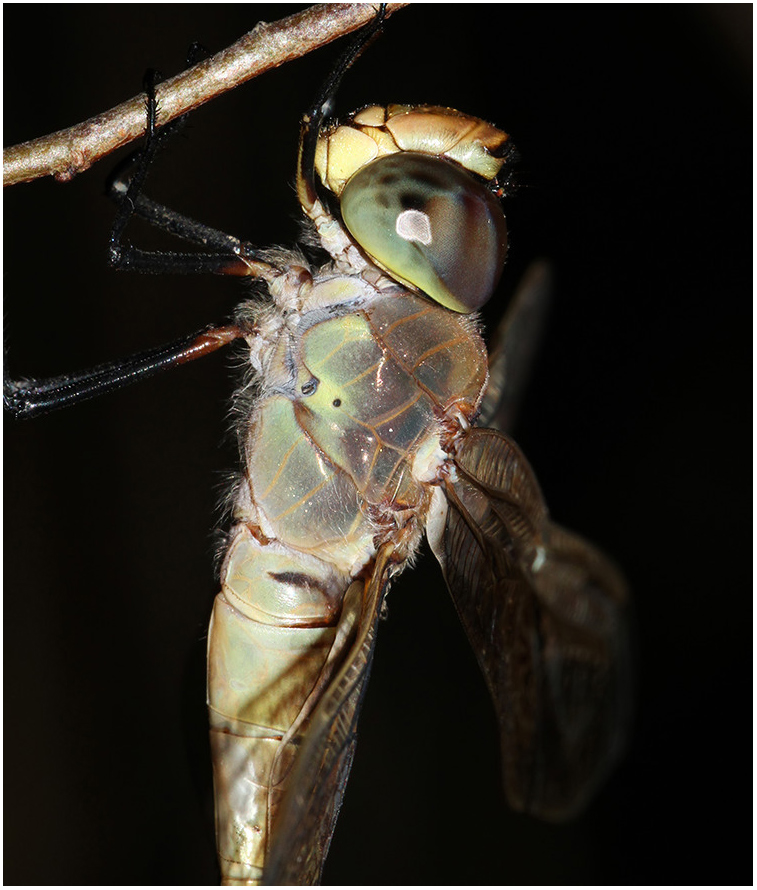 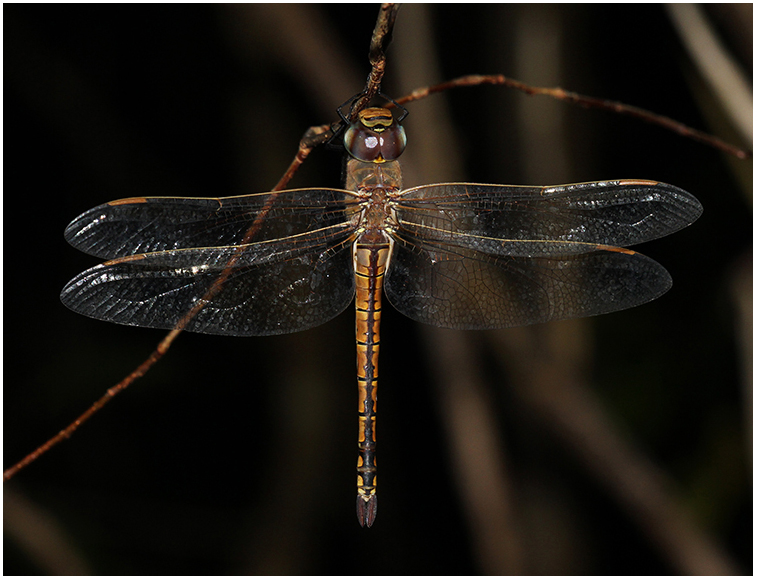 Vagrant Emperor (Anax ephippiger) - female
What confused the both of us was where had this female possibly come from? She was in pristine condition with not a single tear in the wings. Surely if she had come from abroad, she would have been more battered? Perhaps she had locally emerged. We will never know but its nice to think anyway that in a local pool in east Kent, a Vagrant Emperor has emerged. After a few more photos and a good study of her, we made our way back to the car park in darkness. What a surprise to the end of the season. I really didn't think it would end like this but what an early present. My thanks must go to Andrew for this number of messages keeping me up to speed with news and of course, the warden Stefan for meeting me and giving up his time to show me this absolute cracker of a dragonfly. 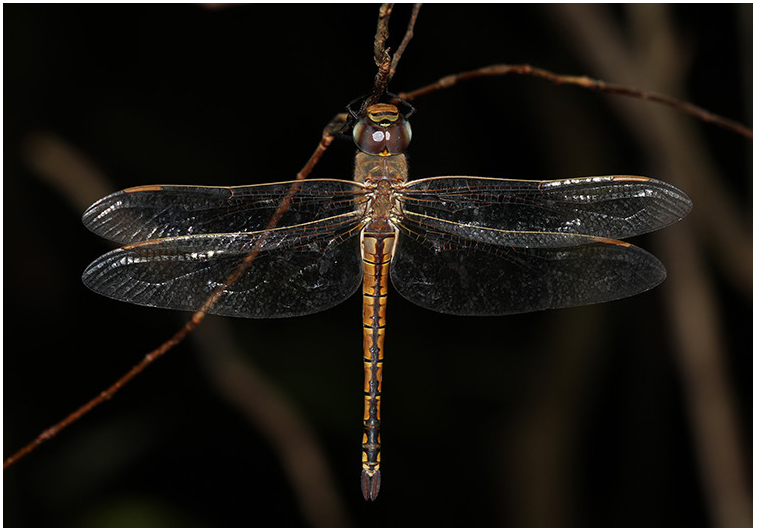 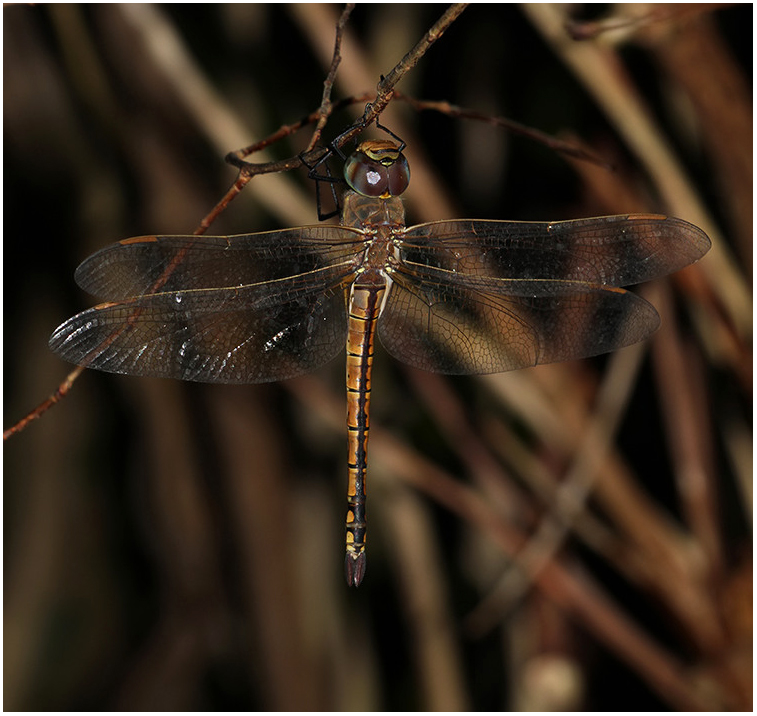 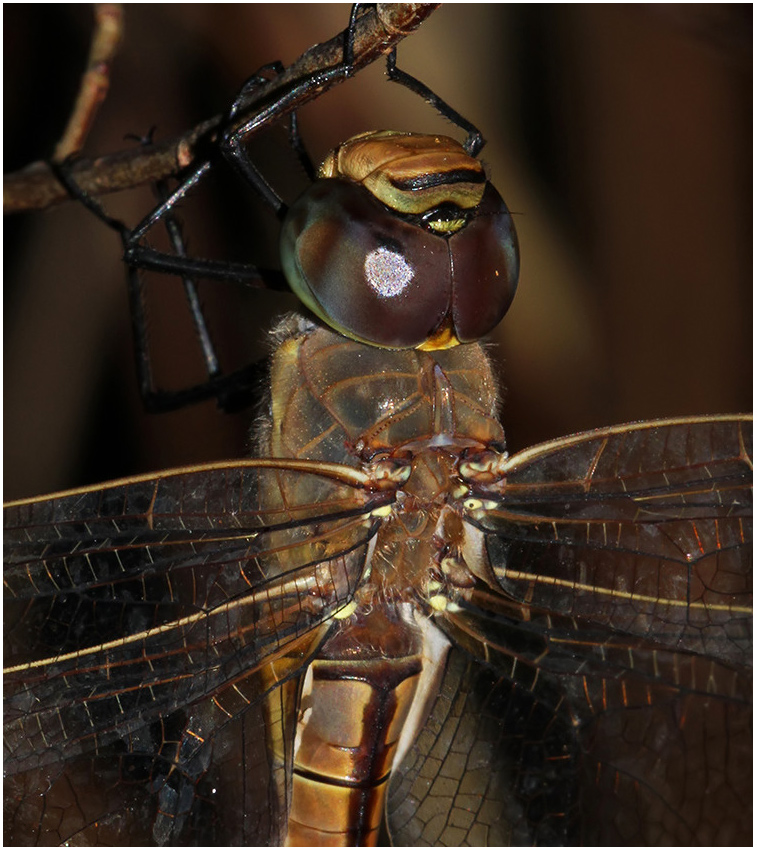 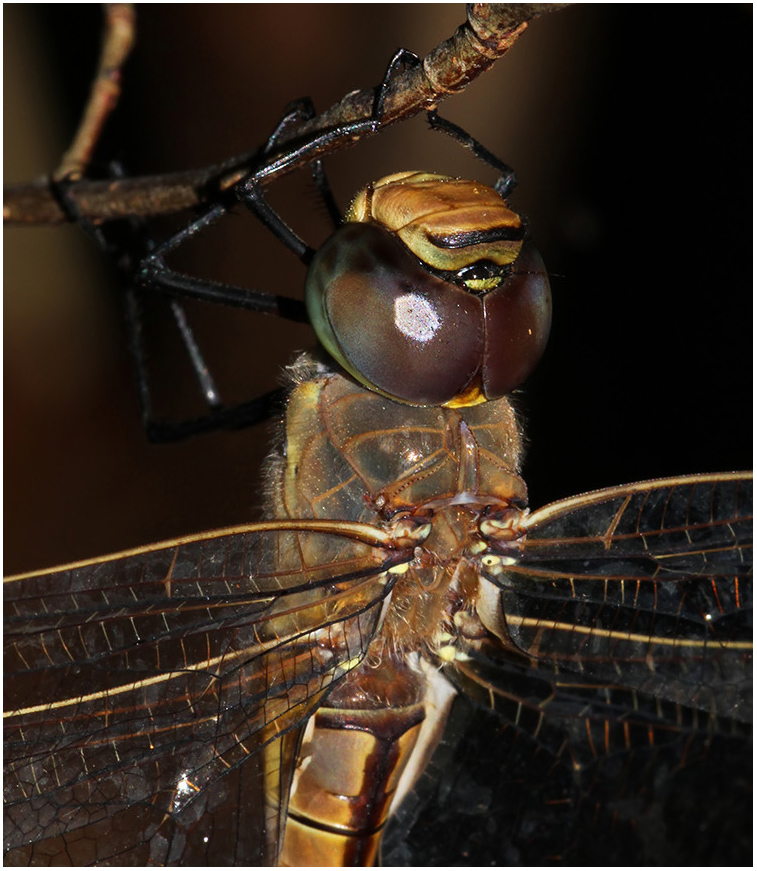 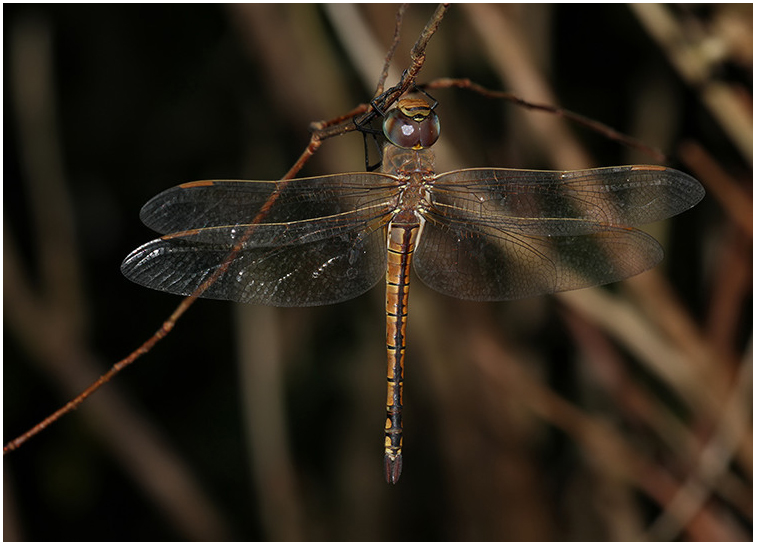 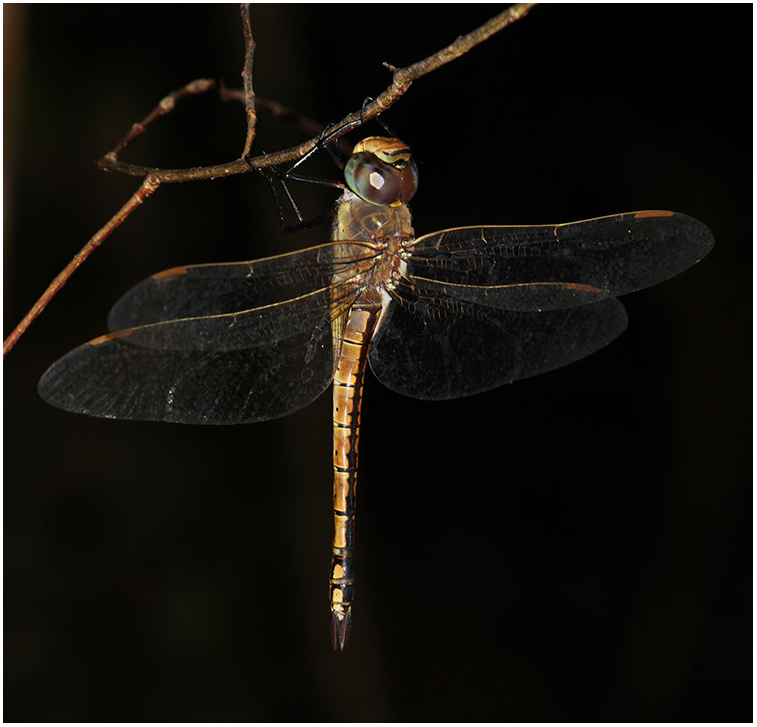 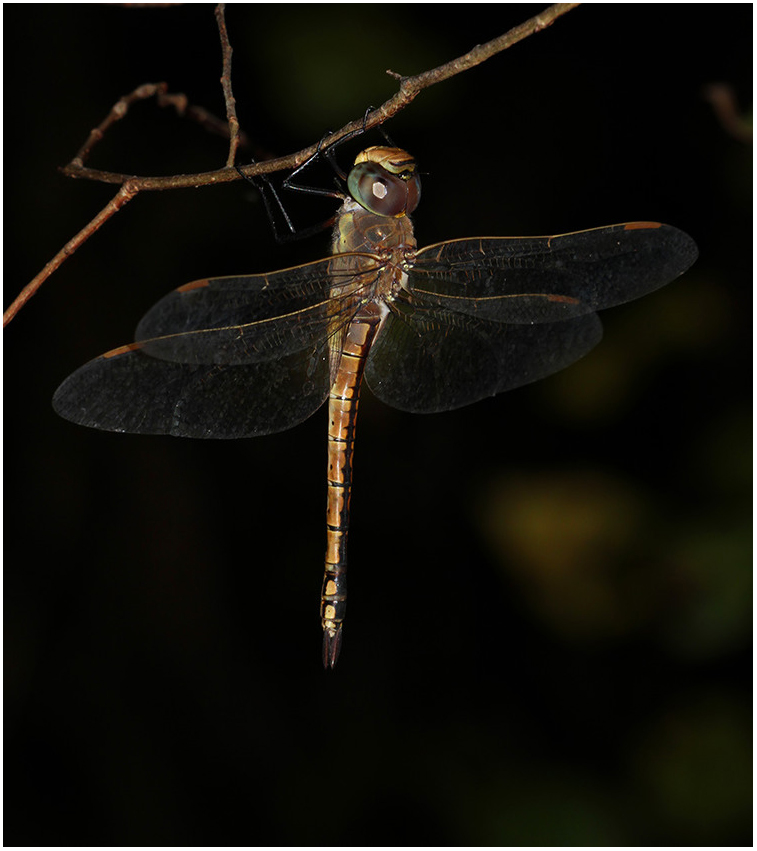 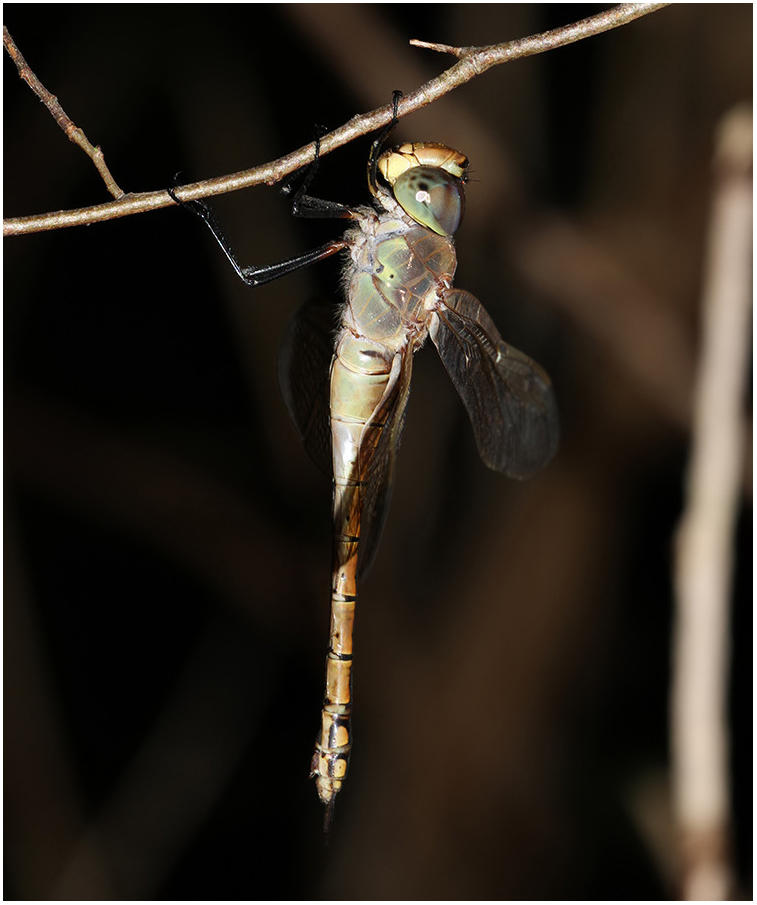