With the Willow Emerald Damselfly season now well under way and good numbers to be seen in and around Nethergong, I decided today on purpose to make an early afternoon visit to see if I could find any Willow Emerald Damselflies mating and ovipositing into stinging nettles as I did last year. As far as I am still aware, I am probably the only person in the UK to have witnessed and photographed these damselflies egg laying into stinging nettles. I was also really keen to see if I could improve on finding and photographing a mating pair which during the past few years, has somewhat eluded me for most of the time. After arriving at 1.30pm in warm, sunny conditions, I took a walk around the east end of the site and managed to see a good number resting up in the reeds in the sun and then took a look along the stream where I had seen most emerge a few weeks earlier. I immediately started to see pairs in tandem flying across the stream and landing in the nettles. A look through the binoculars then revealed other pairs which could be seen ovipositing into the stinging nettle stems. On a few stems were quite a few pairs at a time and apart from the odd pair which stayed and continued to lay, most pairs moved on after briefly laying to find another site to egg lay. This exact behaviour was also witnessed last year as well. It was time to try to get a few photos but with most of the stinging nettles on the far side of the stream and only a handful on my near side, it was going to be a challenge. After walking up and down the stream for a while where I flushed a few pairs in tandem on my side but they soon flew off, I decided on a sit and wait tactic to see if that would work. I picked a decent sized group of nettles on my side and got myself comfortable and waited. I continued to watch pairs in tandem flying past to the nettles opposite until after what seemed an age, a pair finally landed on one of the nettle stems. There were two photos I was after, one being an ovipositing pair laying into the nettle stems and a mating pair in the 'wheel' position. Sitting already still in position, I didn't have to move much and I expected them to start egg laying but was more excited that they started to mate allowing me to start firing off a few photos. The problem I now had was that the male was slightly further around the stem than the female which made the photos out of focus. I hoped that they would move round parallel to me to allow me to grab that most wanted shot. I had a nice background colour of the weed in the stream but as I sat there, two Swans swam past and parted the weed to allow some blue to show through. Not long after and the pair moved into a good position which finally allowed me to fire off a few most wanted shots and by far my best attempt yet at a mating pair. 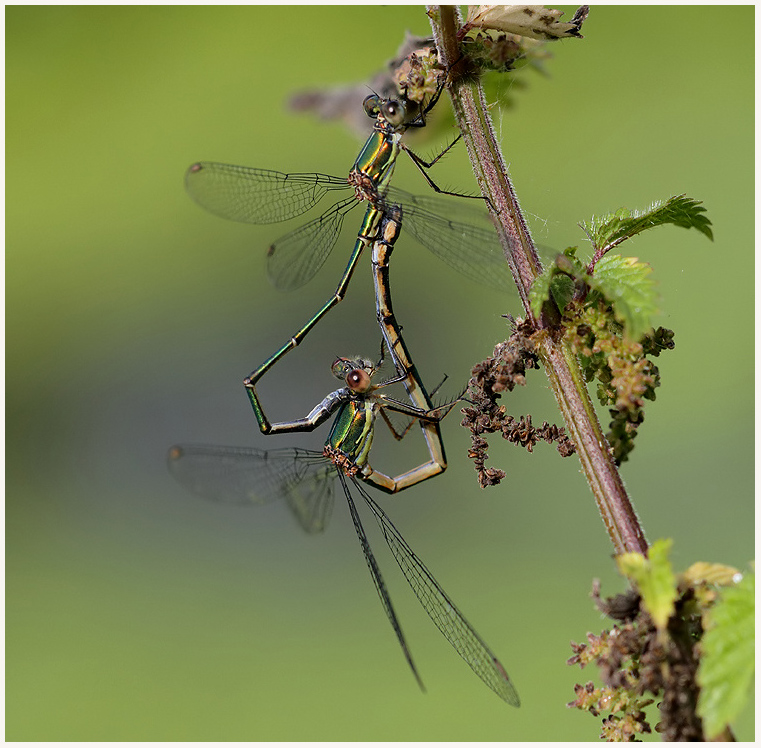 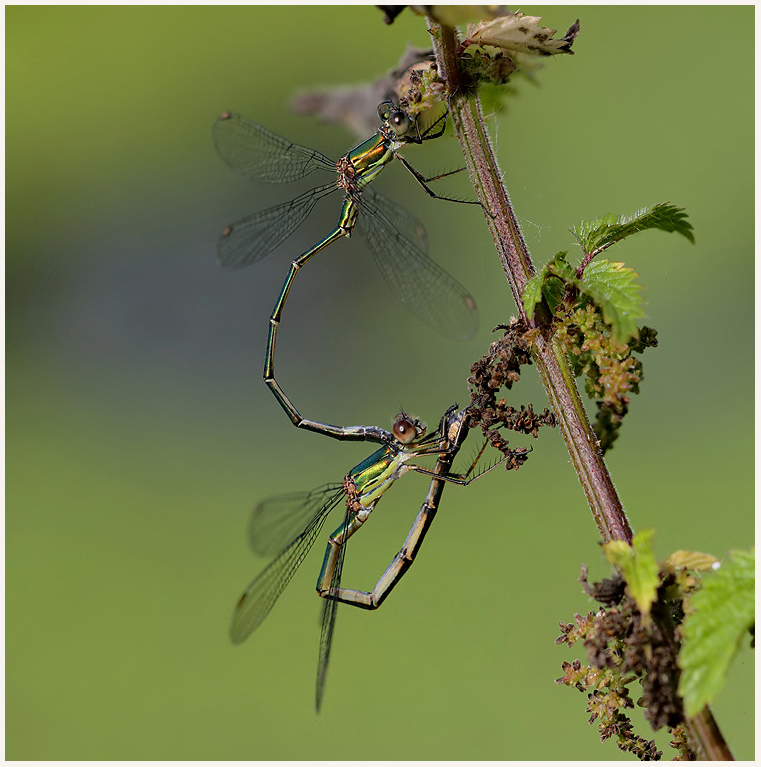 Whilst all of this was happening, another pair landed on some nettles further away and immediately started to egg lay. I didn't want to move and so took a few record shots showing them ovipositing into the nettle stems. I wonder whether other colonies oviposit in stinging nettle stems or it is unique to this group as it obviously works for them? 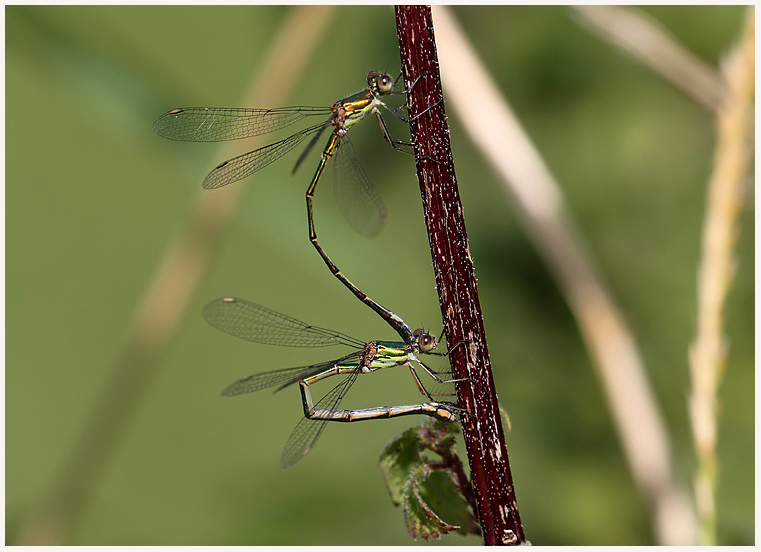 I will hopefully make contact with the farmer soon to ask that they don't cut the nettles close to the water which they happily left last year. With a few photos taken and more to the point, all manner of insects now crawling over me, I spent the last half an hour making a rough count along the stream. I ended up seeing at least 50 Willow Emerald Damselfly with at least 15 pairs seen in tandem but just the one mating pair. I also managed to see 2 Brown Hawker, a few Banded Demoiselle and Blue tailed Damselfly, 1 Southern Hawker but only a couple of Migrant Hawker. There numbers seem to be much lower than normal around here. With my 'wanted' mating pair shot in the bag, I left happily for home but I will continue to return to see whether I can improve on an ovipositing shot in the next week or so. 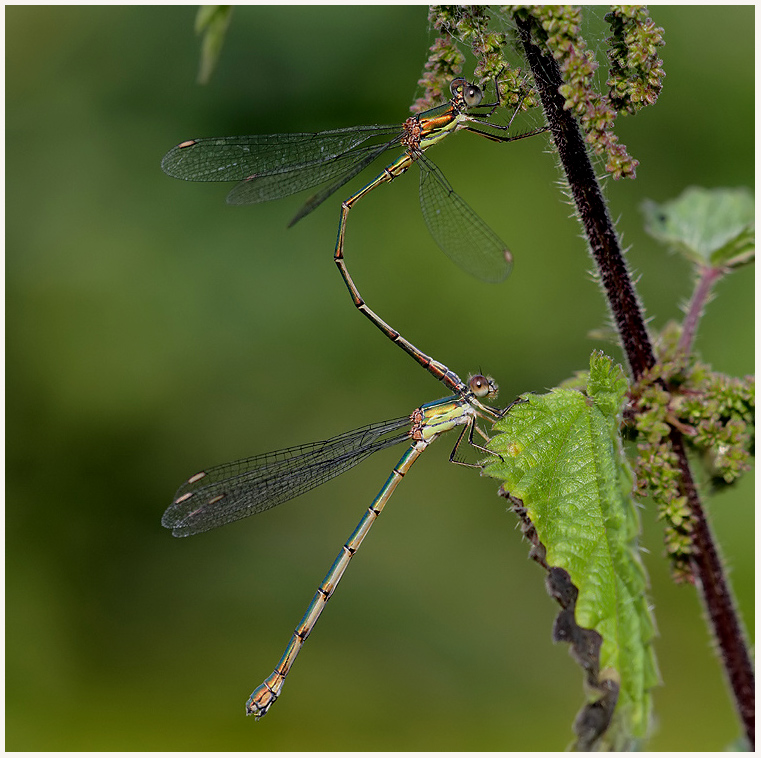