Last night (Friday), I had 2 Emperor Dragonfly emerge from the garden pond and rather than sit out and photograph the emergence, I went out every now and then and watched for a while. I checked this morning about 7.30am and one had already flown off but the other was still in position drying its wings out. With some nice early sun, I spent some time photographing the Emperor which I shall post in due course. After dropping my daughter off at karate at 9.30am, I had nearly 6 hours out and about where I hoped to find a few dragonflies and maybe a photo opportunity. The sun soon warmed up but despite an annoying wind, I found plenty to look at and watch. I visited a site south of Reculver where I spent a couple of hours having a good search and it turned out to be a very good session. I was soon seeing hundreds of Common Blue, Azure and Blue tailed Damselflies rising from the grasses. A few Red eyed Damselfly were flying low over the water and c15 Four spotted Chaser were chasing each other around and returning back to their same perch. I checked an area of reed where I found c10 Emperor Dragonfly exuvia and took a few photos of them as they clung on to the reeds. 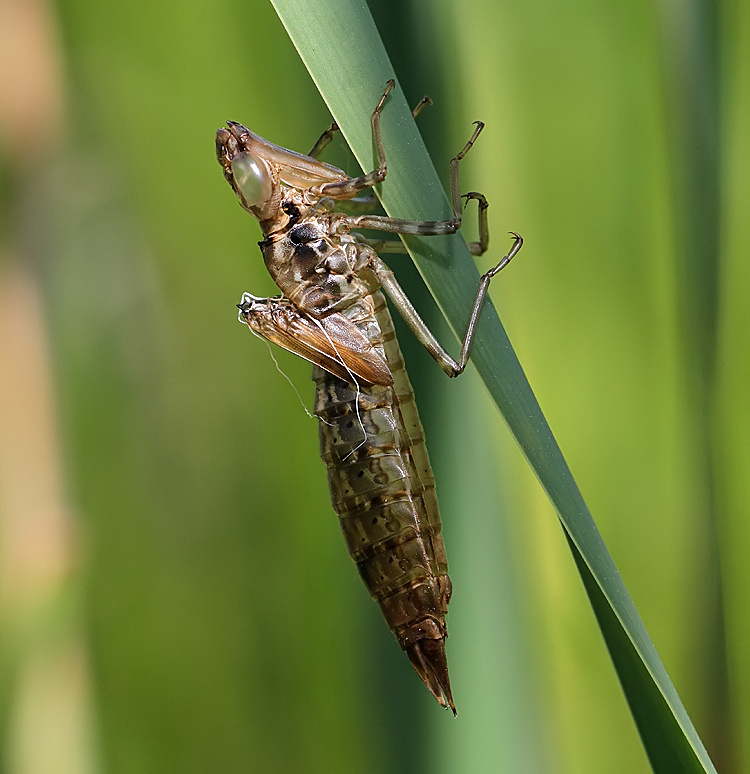 Moving on, it was nice to see my first Black tailed Skimmers of the year, I saw c15 in the end with a couple of males chasing each other over the water. As I walked through the shallows a few Common Darters flew up and into the low bushes and each one was scrutinized just in case. This proved to be a good decision for one darter flew up and landed in the reeds. As I pulled up the binoculars for a look, I could see the blue underside of the eyes indicating that this was a RED VEINED DARTER, a female which remained quite hidden in the reeds as they were being blown around. I tried to get a few shots, most unacceptable as the reeds were in the way but eventually I got a record shot before she was blown out of sight. I carried on seeing 2 Emperor Dragonfly, 1 Broad bodied Chaser and it was nice to see my first 2 Emerald Damselfly of the year, one posing briefly for a photo. 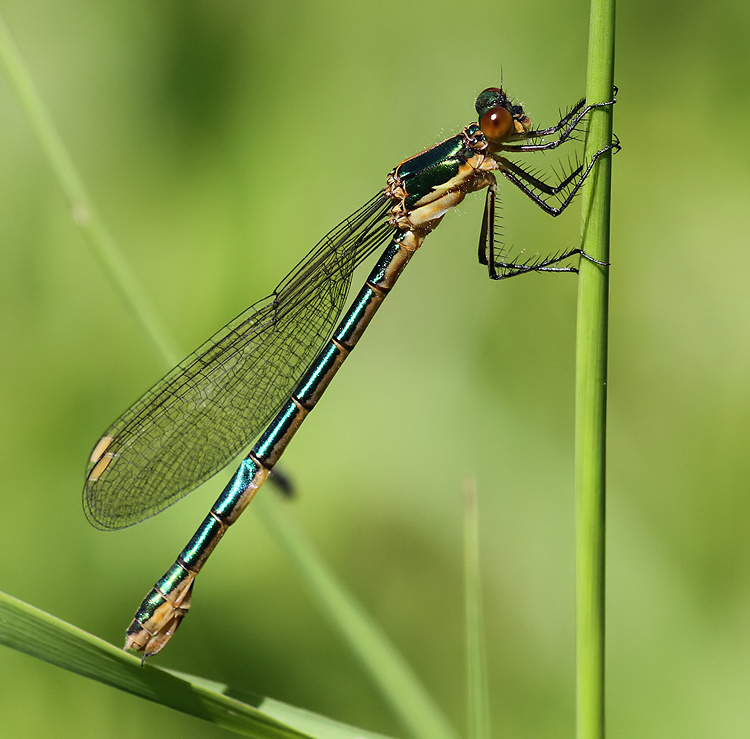 I'm sure plenty more opportunities will come my way with this species. I decided about 11.30am to then drive over to East Blean Woods where yesterday, a Norfolk Hawker was found by Dave Brown in one of the clearings. I looked last night after work with no luck so hoped it would be here today. This is the second year running that one has been seen here and begs the question where they are coming from. Maybe a small colony are out on Chislet Marshes somewhere? I took a walk to the clearing where lots of Heath Fritillary were flying but could not find and Norfolk Hawker. I moved on to another clearing where I found 2 Hairy Dragonfly, 2 Broad bodied Chaser and unbelievably, a Scarce Chaser flew through the woods pausing briefly. What is this doing in the woods I wonder? I walked back and caught sight of a dragonfly flying in a clearing above the path. A quick scan revealed it was the NORFOLK HAWKER, brilliant. I watched it for about 10 minutes along with Andy Vidler where it perched briefly but not long enough for any photos before it flew off high over the trees and out of view. With the day going along nicely I returned back towards Reculver for another check. I spent an hour here and along with more of the species already seen I found another female RED VEINED DARTER. This time I managed a slightly better position and managed a few shots before she flew off low. 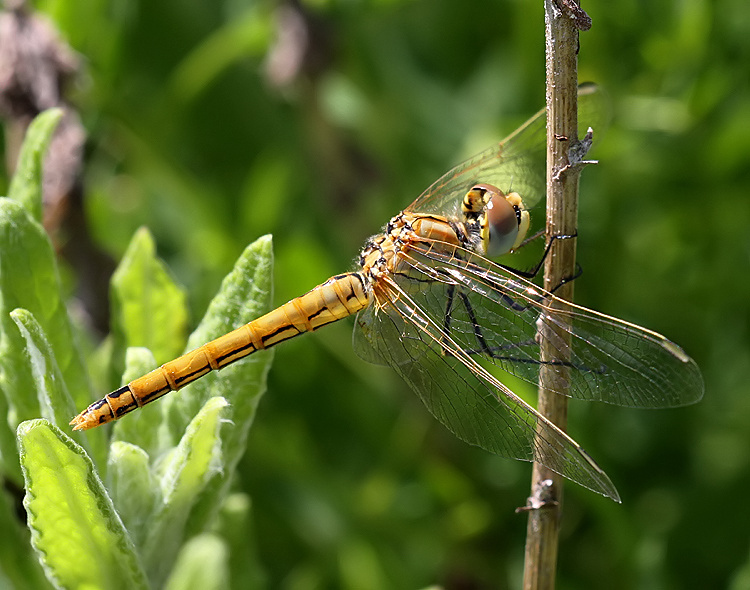 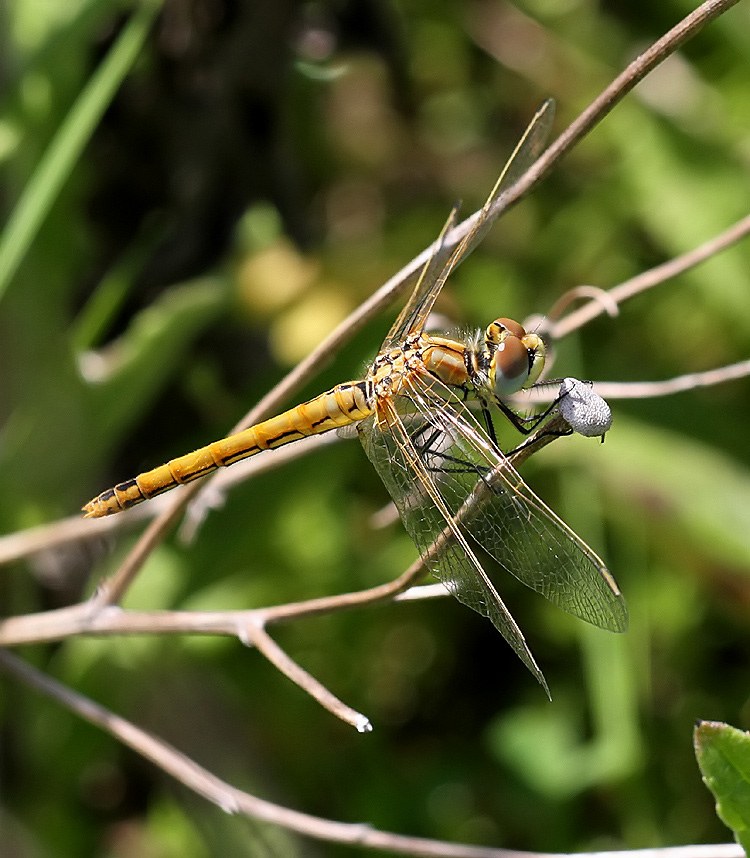 Hopefully a few more will appear here but the site remains private unfortunately. With the day working out well and some excellent species seen, I returned home for some well deserved  lunch and tea! I may make an early morning visit tomorrow morning, if not, hopefully a visit out in the week to see whats about.
Posted by Marc Heath at 5:02 pm